SYNOPSIS :
Winner of Best Local Act at the 2004 NZ International Comedy Festival and the creators of the hit show D’Arranged Marriage, Those Indian Guys bring their unique blend of comedy, Bollywood, madness and mayhem under the exuberant direction of renowned comedian Te Radar to a theatre near you. From India with Love is a celebration of love, loss and survival. With themes as ripe as cultural alienation and the Indian social system how can you go wrong?

From India with Love begins in a small Indian village in the 1950’s. Manhur meets the beautiful Pushpa who is caring for her sick father. Falling in love with Pushpa immediately, even though she is darker than him and therefore undesirable, Manhur sets out to woo her. With the help of a little song and dance he wins her hand, much to the delight and astonishment of the entire village. Now they must help their families and make their fortunes so they journey to New Zealand. But it’s not all plain sailing. They must survive shipwrecks, unemployment, and an extremely friendly Maori tribe before they achieve their dreams of setting up a little fruit and vegetable shop in Pukekohe and having babies! Combining puppetry, digital film projection, Bollywood Indian music and dancing, a raft of multi-media tricks as well as a lot of laughs, From India with Love warms and delights. From India with Love recently SOLD OUT at its premiere season in Auckland with an extra late show on Friday 20th of May selling out in 48 hours.

It then toured to Kuala Lumpur where it met critical success during its 2 week season at the Actors Studio in the Bangsar Shopping Centre. In September Those Indian Guys remounted the work for a triumphant return season in Auckland, where a 5 night season of the show completely sold out at the Maidment Theatre.

From India with Love toured South Africa in 2005 where it played in Durbin, Johannesburg and Richards Bay to great critical success.

Early in 2006 From India with Love was performed at the Fortune Theatre in Dunedin and at the Hamilton Gardens Summer Festival where it sold out 3 weeks before opening. It then played at the SKYCITY Theatre in Auckland and to sell out houses in Wellington at Downstage Theatre as part of the ODDFELLOWS NZ International Comedy Festival in May 2006. On the 17th of June it was performed in Whangarei at the Forum North Theatre and then From India with Love opened the Fuel Festival 2006 on the 21st of June in Hamilton. It played the Concert Chamber for two sell out nights.

"Tarun and Raj play multiple roles and shift through a dazzling array of Indian accents and costumes… the Bollywood-style dancing and video clips featuring a cameo from Pio Terei were highlights… this is one not to be missed, as it offers a sweet and funny insight into life as an Indian New Zealander… had my Indian New Zealand neighbors in fits of laughter…"-New Zealand Herald

"Those Indian Guys have audiences in stitches within one minute from the start…you gotta see it to believe it…From India with Love is just the dose of laughter the doctor recommended…" - New Sunday Times, Kuala Lumpur

FROM INDIA WITH LOVE 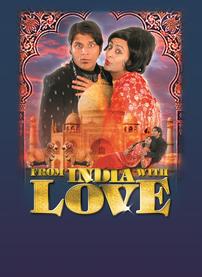