Synopsis:
D'Arranged Marriage is a one man show has something for everyone: characters that will make you laugh until you cry, a few Bollywood-style song and dance routines and a wickedly funny look at Indian culture and life in New Zealand.

D'Arranged tells the story of a young Indian boy called Sanjay who spends most of his life avoiding the issue of an arranged marriage. His nagging family finally gets the better of him but to his surprise he discovers that Neenu, the prospective bride, is the one! Unfortunately 'the one' is already dating the village idiot Rundeep… Adding to Sanjay's trials and tribulations are an uncle who yearns for the perfect woman who loves to cook, clean and play cricket, an annoying cousin, Sudefed…who is full of useless information. Throw in Mr. Dave Patel, Neenu's father, Johnny Walker's best friend and resident snob at No. 42 Smith Street, and you have the funniest parody of Indian family life since Bend it Like Beckham.

Critical Acclaim:
"He's good but, Tarun Mohanbhai is not one in a million. Consider the world's Indian population and you realize he's actually one in a billion and therefore his reach is considerable. In some ways he seems the perfect Billy T recipient. Like James, Mohanbhai is merciless with his culture's stereotypes… His song and dance routines are distinctly un-Indian and deliberately funny. And the slide shows are hilarious. All I can say give a man a cricket bat and he will be funny for a day; give him a sari and a cricket bat and he will be funny for life." Sunday Star Times May 2002

"An irresistible show that is as warm as it is funny!" NZoom 2002

"Warm and hysterically funny!" And can make anyone laugh until tears start rolling down their cheeks. A must watch show for everybody." Bharat Times Australia April 2003

"Mohanbhai's transitions between characters are smooth and almost flawless… An enjoyable evening." Sydney Telegraph May 2003

"…A monsoon of movement, language and characters…this passage from India is a winner..." Waikato Times September 2004 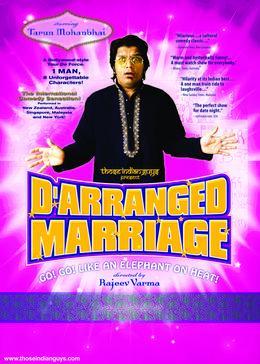