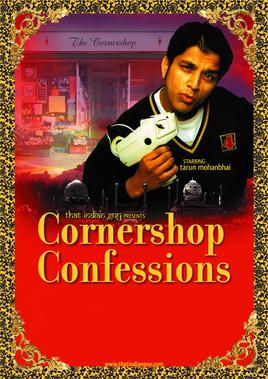 Following the local and international success of D’arranged Marriage and From India With Love kiwi actor/comedian Tarun Mohanbhai returns to NZ with his new show inspired by his own youthful experiences behind the counter of a corner store.

SYNOPSIS:
Cornershop Confessions is the story of Vijay, a budding DJ trying to break away from his father’s store and make his own way in the world. His father struggles with his son’s ambitions and the prospect of having no one to carry on his retail legacy. With a grandmother who can’t speak English, a sister who is not married and a subservient mother this show is funny with a heart to boot!

REVIEWS:
He's good but, Tarun Mohanbhai is not one in a million. Consider the world's Indian population and you realize he's actually one in a billion and therefore his reach is considerable. SUNDAY STAR TIMES

a commentary on Indian integration and social mores, leaving very little sacred. Lazy husbands, overworked wives, arranged marriages, burdensome grannies, dumb customers and shonky deals all get an airing in a show that is funny and affectionate, and sage and sad. Denise Irvine,WAIKATO TIMES