Tarun Mohanbhai first began his comedy career at school entertaining his classmates, but it wasn’t until 1996, that he first performed live at Kitty O’Briens comedy evenings.

In 1998, Tarun performed at his first New Zealand comedy Festival doing stand -up and since then has performed all over the world with his own style of stand up. That year, he also went on to start his own company That Indian Guy which went on to produce the comedy shows Curry and Rice, Curry Muncher, Corner Shop Confessions, One Mic Stand, Tarun talks Wedges and the first season of D'Arranged Marriage.

In 1998, Tarun won Quest of the fest at the New Zealand Comedy Festival and went on to appear in TV’s Pulp Comedy in 1999 and consecutive series. In 2002, Tarun devised D’Arranged Marriage with Rajeev Varma, for which he was nominated for a Billy T Award. The show was a sell-out success and was picked up by Mollisons in Australia on an international contract. In 2003, he toured extensively with D’Arranged Marriage both nationally and internationally.

From 2002 onwards, he created Those Indian Guys with New Zealand Actor Rajeev Varma. With Those Indian Guys, Tarun has toured extensively with D'Arranged Marriage and From India with Love to Australia, Singapore, Malaysia, South Africa, USA and the U.K. between 2003 and 2010.

In 2003, he was a co-founder of The Untouchables Collective, New Zealand’s first South-Asian theatre company, which premiered its first production Yatra at the Wellington Fringe Festival 2004, to great acclaim.

In 2005, Tarun was starred along with other comedians in Last Laugh a hidden camera show for TV2. In 2007, Tarun starred in two prime time comedy shows for TV3: The Millen Baird Show and A Thousand Apologies. The Millen Baird Show was nominated for Best Comedy Programme in the 2009 Qantas Film and TV Awards in New Zealand.1000 Apologies is ground breaking New Zealand Television. Its the first prime time sketch comedy show in the nation that focused on the Asian and South Asian experience which he also was a contributing writer for.

Feature Film credits include: Tyrannical Love, Tarun shot Curry Munchers in New Zealand in 2010 and it is slated for national release throughout New Zealand on February 24th, 2011. For more information about Curry Munchers visit the website. He also has a cameo in Rosanne Liang’s upcoming feature film My Wedding and Other Secrets.

Short film credits include: The Warning and Love in the Time of Chlamydia. In January 2008, Tarun worked alongside 11 other performers to take part in a live sketch show for CBS in Los Angeles which was performed for casting agents and studio executives. From 2008 -2010 Tarun was the host of the Asian Radio Show on Radio Live.

Tarun is an established MC, Corporate performer and established comedy writer and is a New Zealand born Gujarati Indian. 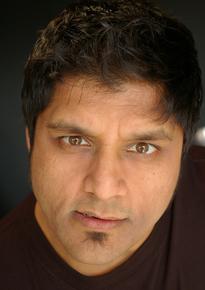